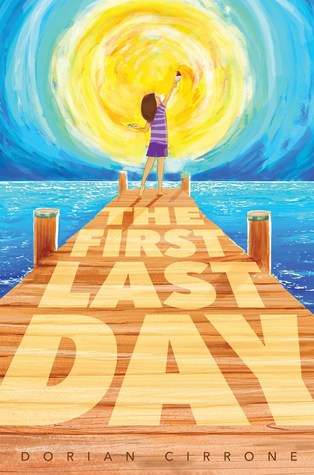 The magic of summer comes to life in this enchanting middle grade debut about an eleven-year-old girl who must save the future by restarting time after she realizes that her wish to relive the last day of summer may not have been such a great thing after all.

What if you could get a do-over—a chance to relive a day in your life over and over again until you got it right? Would you?

After finding a mysterious set of paints in her backpack, eleven-year-old Haleigh Adams paints a picture of her last day at the New Jersey shore. When she wakes up the next morning, Haleigh finds that her wish for an endless summer with her new friend Kevin has come true. At first, she’s thrilled, but Haliegh soon learns that staying in one place—and time—comes with a price.

And when Haleigh realizes her parents have been keeping a secret, she is faced with a choice: do nothing and miss out on all the good things that come with growing up or find the secret of the time loop she’s trapped in and face some of the inevitable realities of moving on.

As she and Kevin set out to find the source of the magic paints, Haleigh worries it might be too late. Will she be able to restart time? Or will it be the biggest mistake of her life?

This concept has been multiple times over, most notably in my mind with the movie Groundhog Day, but I think The First Last Day does a good job of keeping it fresh. After all, Kevin and Haleigh are just kids, and they end up foreseeing a huge tragedy with the option to never face it. The actual plot was much more compelling than the premise gave it credit for, and I think Cirrone did an amazing job of displaying the emotional aspects of this book.

What I was even more impressed by was the magical realism. It’s easy to make average magical worlds and average realistic worlds and bring them together, but it’s difficult to make great magical worlds and great realistic worlds collide. In the story, there’s next to no disappearing parent syndrome. Kevin and Haleigh both depend on their parents a lot, and they both have really supportive adult figures in their lives. In a world where middle-grade grows increasingly unrealistic, The First Last Day was a breath of fresh air.

All in all, this was a great book that I would recommend. The writing wasn’t exceptional and the beginning was weak, but certain elements to it were fun and well thought out. The world-building and the characters were done very well, and I ending up loving the concept way more than I initially thought I would. It tugged on my heartstrings without being overly emotional, and all in all, I thought it was a well-rounded story. Will be recommending. 3 stars.

All summaries, blurbs or descriptions on any review, spotlight, interview or post in general that I do are taken from Goodreads or Literally and are the publisher's description. I take no credit for these descriptions. They are not my own.
%d bloggers like this: